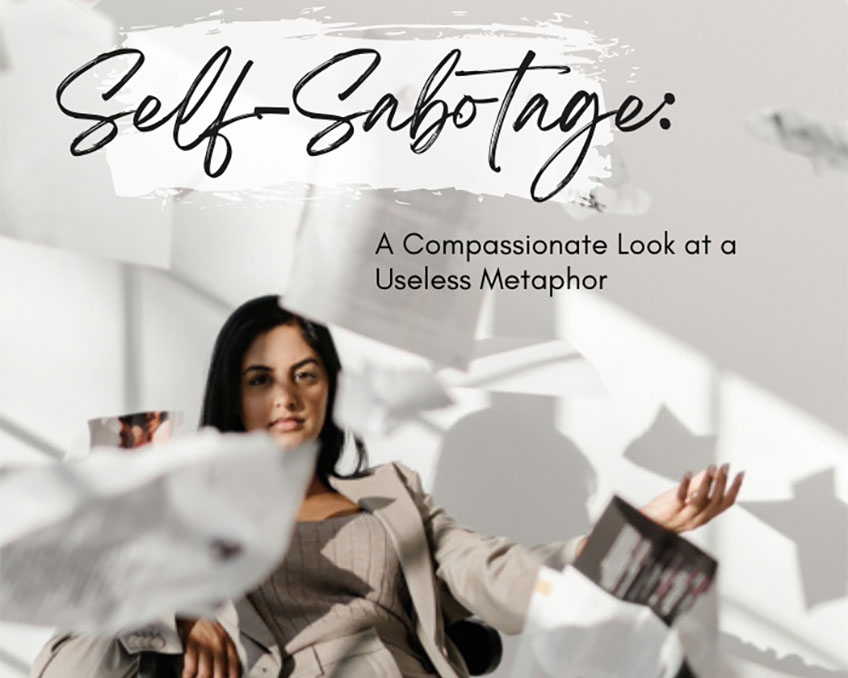 28 Jul Self-Sabotage: A Compassionate Look at a Useless Metaphor

Posted at 03:05h in Blog, Newsletter by [email protected]

Have you ever heard someone talk about how they worry they’re engaging in self-sabotage? It could sound like this:

Henry: I don’t know why I’m not getting this project in on time. I’ve had every intention of doing it. But I get distracted by my anxiety. What if I don’t turn in good work? I think I’m sabotaging myself. Maybe I just don’t want to succeed.

Or perhaps you’ve read articles in magazines about self-sabotage similar to the following:

Magazine: “The five ways you can engage in self-sabotage without even knowing it!” Or “ Are you a self-saboteur? Here’s how to stop that harmful behavior!”

Finally, have you ever experienced anxiety, worry, or doubt about your ability to do something? Could it sound something like this?

You:  I don’t know what’s wrong with me! I’m worried! Too anxious to:

What if I fail? Maybe I’m sabotaging myself!

Have no fear! In this newsletter, we take a focused look at this metaphor.

First, we’ll look at the definition of “sabotage.” Then we’ll take apart that bit about you intentionally doing something that defeats you! Finally, I’ll show you one method that’s worked for me to shift the focus of your brain’s attention from metaphors that slow you down to thoughts that empower your brain to keep going with clarity, focus, ease, and grace.

According to Dictionary.com, this is the definition of sabotage:

Any underhand interference with production, work, etc., in a plant, factory, etc., as by enemy agents during wartime or by employees during a trade dispute.

The above refers to intentional destruction. What’s the origin of that word? One version is that in the late 1800s, workers in a Belgium factory became so angry at their boss that they took their wooden shoes, or sabots,  and threw them into machinery to damage it, thereby committing sabotage!

The term “self-sabotage” first appeared in psychoanalytic literature in the early 20th century as a metaphor to describe why patients were unsuccessful in attaining essential life goals. They posited that self-sabotage was an unconscious defense for factual or imagined mistakes. So patients wouldn’t know they were doing it!

Fast-forward: the term self-sabotage has become common. Who wants to think that they are failing? And here’s a dilemma: how can you unconsciously yet intentionally do something?

Now, let’s get down to business. I’ve had the privilege of working with people for over 50 years. First as a psychology intern, then as a licensed clinical psychologist, and then as a Master Certified Coach through the International Coaching Federation.

In all my years of practice, I rarely have, if ever,  seen anyone who intentionally wants to suffer or be unsuccessful. What I have seen is this:

What does all this mean for us? One thing is for sure: unless you are intentionally hitting yourself over the head with a wooden shoe, I suggest you retire the term “self-sabotage” forever!  This metaphor has no value.

Instead, think about this: your anxiety or fear of failure is a sign that you are up to something! Look at it this way: unless you suffer from chronic anxiety, which you can get help for, most of our fear comes up when we have a goal or dream that we want to accomplish.  Look at Henry’s example. He wants to do a good job. His anxiety is normal and natural. I’ll explain why in another article. What we need to know here is that self-diagnosis gets us nowhere. Fast. What works is to refocus your brain every time you get worried that you’ll fail. When you refocus, your brain calms down. Your prefrontal lobes swing into action, and you find yourself moving forward.

Here’s what often helps. Practice this in the order I’m giving you, and you might find yourself taking steps toward your goal much more easily. But first, give up permission to ever use the self-sabotage word again, or to read anything about it. It’s time to retrain your brain toward success instead of focusing on self-diagnosing why you’re failing!

Remember: it’s not whether you become anxious or fearful. We all get that way sometimes! Really! Instead, it’s about whether you learn to take action nevertheless!

Try this out, and let me know what you see! You can reach me at marianemeth.com.

Oh!  And one last thing: let’s say you’re reading an ad on social media that offers a workshop or seminar. Since its description will probably have one or two metaphors, ask yourself this question: Do the metaphors make me feel open and hopeful, as in “being on your hero’s journey,” or do they give me a sense of heaviness, as in “how to stop being your own worst enemy”?

You know by now which one(s) to focus upon, yes?

Have a great weekend!
See you next time!