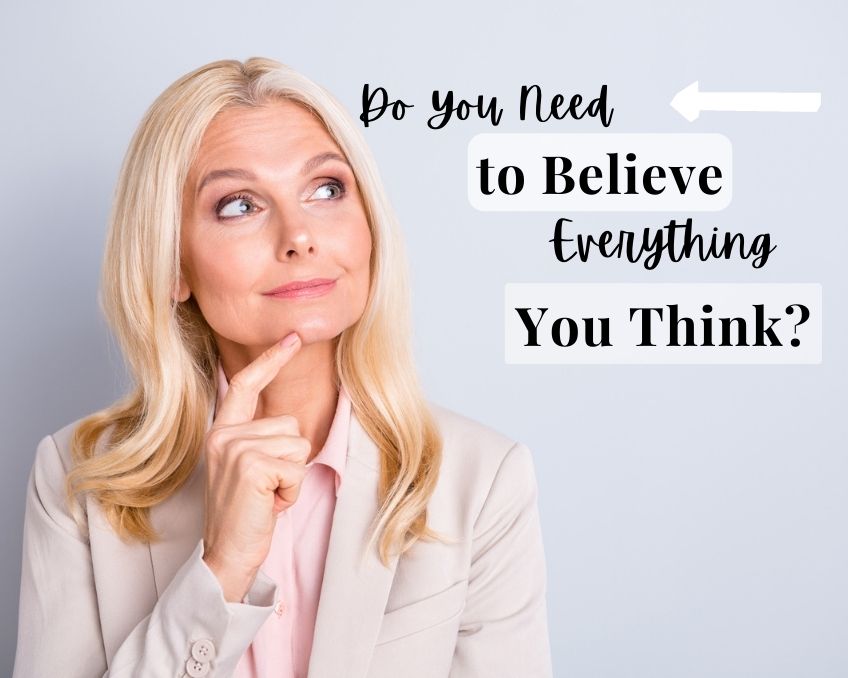 26 May Do You Need to Believe Everything You Think?

Posted at 00:29h in Blog, Newsletter by [email protected]

“It is well for people who think, to change their minds occasionally in order to keep them clean.”

Years ago, when  I had a psychotherapy practice,  I spent many sessions listening to clients disclose their thoughts and feelings about themselves and others. These thoughts primarily bothered them because they believed them!

I remember a courageous 42-year-old woman, the head of an internationally-based sales team, talking to me about her troublesome thoughts. She’d made a mistake in giving her team the wrong due date for an important project. She was convinced that she was not up to leading this team. Yet she was bold enough to allow me to challenge that this belief about herself really meant something.

Lauren: I hate to say this, but I think I’m incompetent. This was a big mistake. I should have known the correct date for this project. It’s part of an effort at the company to revamp a portion of our website. This held everyone up by two weeks! I feel terrible!

Me: Ok: you don’t feel good about yourself. You really and truly believe you’re incompetent, right?

Lauren: Absolutely! I mean, is that the way to lead the team? Thankfully, we have a great group, making up for some of the lost time. I don’t know what I’d do without them.

Me: What if you didn’t have to believe everything you think? For example:  what if you saw thoughts are like bubbles. They arise, hang around for a couple of moments, and disappear. Sometimes they have significance, but most of the time, they don’t. What makes the big difference is whether or not you start believing everything you think.

By the time we finished our session, she was laughing. She saw that calling herself incompetent didn’t mean that she really was!

I had put her through a version of the “Triple Filter” test Socrates used to see whether one should believe the gossip about another. According to Phillip Chrysopoulos gossip was a potent tool to leverage power. It was wielded by people in power and those without it. For example, women could use it as admissible evidence against their adversaries. It didn’t matter where it came from or whether it was true!

I asked Lauren to apply this “Triple Filter” version of the test to her thought that she was really, truly incompetent for making that mistake. I offer this to you as a guide for your own “inner gossip.”

Me: The first filter is Truth. Are you absolutely sure that what you are thinking is true?

Lauren: It feels true, but no. I’m not absolutely sure that it’s entirely true (she was beginning to think about the way she empowers her team to handle crises.)

Me: Ok. We don’t really know if it’s true or not. Let’s apply the second filter of Goodness. Is what you’re thinking about yourself something good?

Lauren: Nope! It’s definitely not! It makes me cringe inside to think I’m incompetent.

Me: Ok. So you’re thinking something bad about yourself, even though you’re not certain it’s really true? (At this point Lauren starts to smile.)

Let’s apply the third filter of Usefulness. Is what you’re thinking about yourself useful to you? Can it take you to the next level of excellence on your path to being the best leader you can be?

Lauren: Well, no. It doesn’t give me anything at all to work with.

(By this time she’s starting to laugh.) Ok. You’re asking me to see if what I’m thinking about myself passes through the filters of True, Good, and Useful. Right? Well, it doesn’t.

Me: Yes! If your thought that you’re incompetent is neither true, good, or useful, why spend time thinking about it? Is there a thought you’re interested in replacing it with? Let me suggest something.

How about: “I am willing to be an effective leader?” What would you say to putting that on a 3×5 inch card and looking at it at least three times each day for the next week? If you do, I’ll bet you start gathering evidence for that thought, rather than the other one.

Reading the above dialogue, are you willing to challenge a bit of “inner gossip” today? Take something you think about yourself that makes you worry about your own competence or ability. Put it through this version of Socrates’  “Triple Filter” test. And then look for a replacement thought: one that is true, good, and useful. If you put “I am willing to be” in front of the statement, you’ll be more likely to gather evidence for it.

If you don’t contradict yourself on a regular basis, then you’re not thinking!