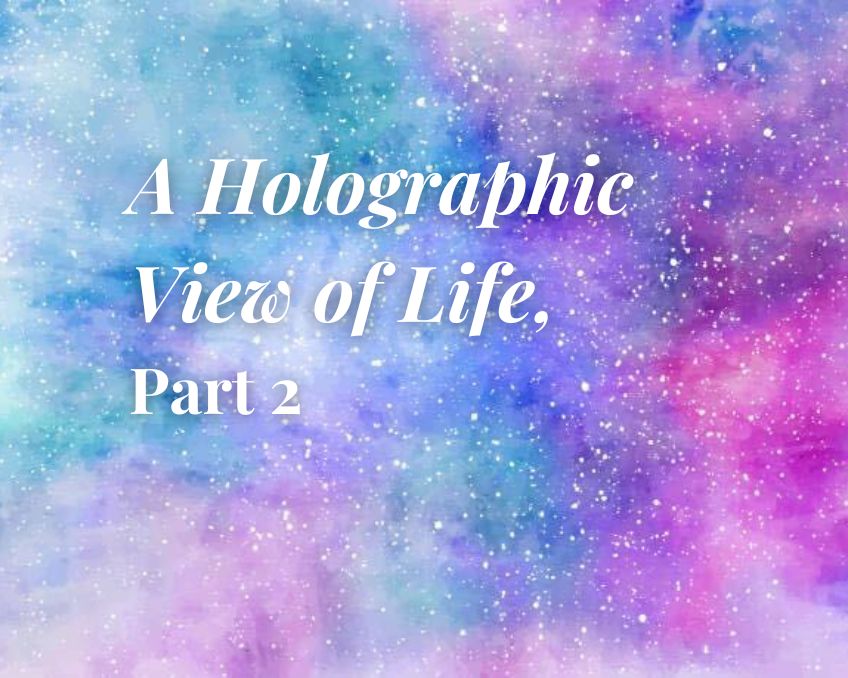 Posted at 00:02h in Blog, Newsletter by Maria Nemeth 1 Comment

Last week we looked at one aspect of living with a holographic view of life. From this perspective, we see that how we are with one part of life reflects how we are with all of our life.

There’s a principle in physics called quantum entanglement. You could Google this and discover who found it. The main point is to take two particles leaving each other at a particular angle.  We can call one of them A and the other B. Then, change the angle of A’s trajectory. Immediately B’s trajectory changes to conform to A’s! Even though they are separated by increasing distances!

Einstein referred to entanglement as “spooky action at a distance.” He was confounded by how one particle can effectively “know” something about another particle instantaneously, even if a great distance separates them. It goes against the idea that nothing, not even information, can travel faster than the speed of light. Some physicists, like David Bohm, see this as proof that the Universe is a hologram.

Why should this affect our lives? We can’t see these subatomic particles or know what to do with them. Let’s return to Blake’s poem shared in my last article: to see the Universe in a grain of sand. It’s possible that we are connected with everything. And, at the “everyday” level of things,  what I do in one area of my life instantly affects other areas.

Let’s get back to the above premise about the interconnectedness of life. I want to tell you what happened to me this week. It will, I hope, demonstrate what I’m talking about.

If you didn’t already know, Sacramento City has become world-famous for having the most trees, even more than Paris! In the last two weeks, we’ve had severe rain and wind. The ground has been saturated, and as a result, we’ve lost at least a thousand of our “famed trees,” some of them decades old.

My sweet young crepe myrtle tree snapped in half at my home during one particularly massive gust of wind. In addition, one wall in my garage showed telltale signs of water damage from the roof.

The storm insurance inspector scheduled an evaluation of the damage done to the wall. Fine. Only one thing: the access to the wall was blocked by several storage boxes.  We needed to move them.

Here is the vulnerable part of the story:  I opened the boxes and saw they contained LP albums from my Mother’s massive music library.  I haven’t looked at them in 25+ years!

I don’t know if you’ve personally had an experience like this. I was both surprised and ashamed.  However, In keeping with the premise of the last newsletter article, I’ve promised to look at and sort five (5) albums daily. Some I will keep. Some I’ll give to my sister Lisa. Others I will attempt to sell.

As I commit myself to the above project, I see other areas of my life that need attention. I have a beautiful guitar that has languished for years. It’s time to get it out and play a simple tune by the end of this weekend.

The above reflects what I wrote about in the last article. Once again, In keeping with the holographic nature of life, action in one area simultaneously affects others. If I promise action in one area of my life, other areas open up for me. In this case,  playing a tune on my guitar wasn’t possible until I promised to clear away the massive number of my Mother’s  LPs.

I notice that people can have difficulty choosing an action.  So let me suggest a way you could proceed.  Everyone uses six forms of energy to create something in physical reality. They are money, time, physical vitality, creativity, enjoyment, and relationship. Pick one of these to concentrate on for the next week. For instance, is there something in your relationship with the energy of money in which you’d love to have a breakthrough? It could look like this true story. It happened many years ago when people primarily wrote checks to cover expenses.

Amelia: Two months ago, some girlfriends asked me to join them on a 4-day cruise down the coast of California into Baja. I told them I didn’t have the money to do it. So they left without me. But the truth was, I didn’t know if I had enough money or not! This was because I’d round the amount up to the nearest dollar in my ledger whenever I wrote a check. And I hadn’t checked my bank account in over a year.   So, I decided to check just how much money I had in this account on a whim. The embarrassing truth: I had enough extra money to fund 75% of that cruise! I could have gone with them. I saw what being “asleep” with money had cost me: a good time with my friends!

Until next time: here’s to your life’s journey with eyes and heart wide open to the possibilities surrounding you!