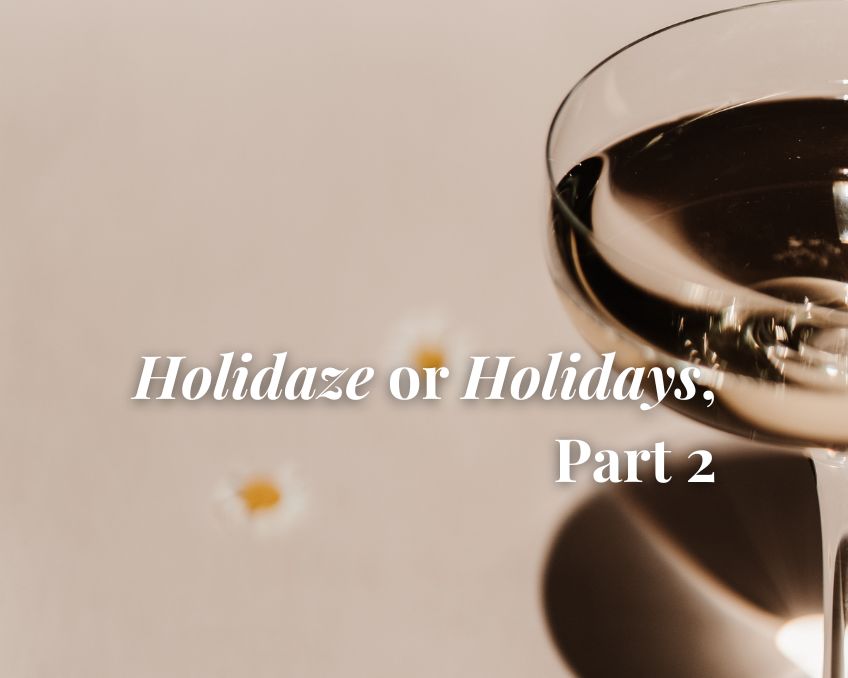 Posted at 10:33h in Blog, Newsletter by [email protected]

“Yesterday, I was clever, so I wanted to change the world.
Today I am wise, so I am changing myself.”

“Lots of people want to ride with you in the limo, but what you want is someone who will take the bus with you when the limo breaks down.”

In my last newsletter, we looked at what you might do to bring light into your and other people’s lives. We saw specific ways to “de-stress” during this time of year.

In this Part 2, we’re going to look at two different approaches to having the Holiday Season be one in which your heart is still warm long after the holidays have passed. You’ll see how to avoid waking up on January 2nd with a spending hangover. You’ll also discover how to give gifts that “keep on giving” throughout the year.

I used the metaphor of spending hangover many years ago when I had a regular column in the Sacramento Journal called “Mind over Money.”  It described the terrible apprehension we might experience before seeing our previous month’s credit card bills. It’s that niggling sense that we’ve gone overboard with gift-giving and party-hopping. As one client put it:

Marlene: This year, I overdid it with spending.  To begin with, I had given myself a somewhat vague, although generous, budget. However, I didn’t keep to it at all!  It was as though I’d thrown this budget out the window.  I saw so many opportunities from all the catalogs I’ve received to spend money on gifts for other people, which led me to buy gifts for myself. And then there were the parties: I had to wear new holiday outfits for work, friends, or family. Not to mention that I gained six pounds in three weeks: is that even humanly possible?

There are numerous ways of keeping ourselves within a spending budget, no matter how demanding that may sound:

Now we’ll look at gifts that “keep on giving” long after the Holiday Season.

Many years ago, when some colleagues and I started the Academy for Coaching Excellence, I had an assistant who has since moved out of state. However, during the last Christmas, we were together, I received a present from her that I haven’t yet forgotten.

It came in a 6×6 inch box, covered in red velvet paper, and tied with a golden ribbon. When I opened the box, inside was another smaller one, with blue velvet paper. And inside that box was a letter. In it, she apologized for not having enough funds to buy me the present she had wanted to buy. So, she hoped the letter would bring my heart the warmth of this season. The letter described particular gifts she felt I’d given her, both as her “boss” and as her friend. I felt my eyes getting teary. The depth of her acknowledgment went right into my heart. I experienced a deep sense that “all is well.”  I kept both boxes along with that letter for about six months, and every time I felt tired or doubted what I was doing, I’d look at them and relax!

Since then, I’ve discovered that we don’t have to be “broke” to create a present of great value to both the giver and the receiver. So: are there people who would love to get this kind of present from you for Christmas?

Some might think they don’t have the “time” or “creativity” to do something like this. But think of it this way: creative assignments like this almost always bring as much joy to the giver as they do to the receiver!

So, consider to whom you would like to give this important, heart-warming gift!  We almost always have at least two people whose lives would be deeply affected by our acknowledgment of who they are and what, specifically, they’ve brought to us by their presence!

The second example of a “gift that keeps on giving” also involves some creativity. I’ll tell it in the voice of someone who did this and why:

Evonne:  About three years ago, I was just starting to work at a new job.  It was during Hannukah when I typically give my Mother a present. But that year, I didn’t have much money at all. So, I got the idea to create a coupon book, with each coupon good for a different treat I could give her. For example, there were four coupons, each giving her a 30-minute foot rub on the evening of her choice. Another coupon was good for a special picnic at the park of her choice, with me bringing all the food. And one coupon was good for me to take her to dinner and a “movie” at my house, where we could relax and enjoy whatever she wanted to see afterward.  Some more coupons were redeemable for other minor services, like taking her to her favorite art museum. Things that she loved to do.  I must say that this was one of the best ideas because it kept us in contact with each other much more frequently than if I’d simply bought her a magazine subscription.

She loved the idea of this coupon book so much that she decided to create one for each of her closest three friends!

These last two suggestions, one for a coupon book and one for a brightly-decorated “acknowledgment box,” are about strengthening relationships during this Holiday Season.  While it’s true that many of us have less disposable income, it is also true that we can become ever more creative in how we bring gratitude and love to the people who are important to us.  Because, after all, this is the true meaning of this time of year, isn’t it?

Please be kind to yourself during this time! In my next article, we’ll explore the miracle of relationships that warm our hearts and nurture our spirits.

“Sometimes being a friend means mastering the art of timing. There’s a time for silence. A time to let go and allow people to hurl themselves into their own destiny. And a time to prepare to pick up the pieces when it’s all over.”

“Close friends are truly life’s treasures. Sometimes they know us better than we know ourselves.”